A few days ago, I explored Fort Gaines, a military fortification that dates (in various iterations) to early French settlers to Mobile Bay. The current Structure was principally built in the 1850's and was invaluable during the Civil War and served the military on through the first World War. Fort Gaines is where during the Battle of Mobile Bay Admiral Farragut issued those famously paraphrased orders, "Damn the torpedoes! Full speed ahead!"

It's also supposed to be a very haunted locations, filled with spirits from French colonial occupation, the Civil War, and thereafter. Phantoms voices, apparitions, and uneplained occurrences have all been reported by visitors.

Even though I was blessed with a quiet morning with scarcely any visitors, I nonetheless came back with nothing but pictures of this interesting historic monument. I attempted to record some EVP, but without any success--mostly. I did have one recording reveal what sounds like someone with a heavy foot shuffling or stumbling nearby. The "footsteps" start out softly before growing louder and then they begin to fade again, as if the sound were coming from afar and passing near the recorder; in this case, my cell phone. But those sounds could have been an echo across the stone and brick walls. I can't be sure. I won't make much of it. There were also ferries running every few minutes and they would make a chug-chug-chug sound as they approached the docks across from the fort. It may have been this sound distorted by the recorder. I didn't hear it at the time, but then I wasn't really paying attention. I mostly followed a protocol of placing the recorder down, taking my pictures, and just talking aloud to myself about what I was seeing and asking questions of no one in particular.
2 comments: Links to this post

The Paranormal In TV

Last week, the thrilling search for Dr. Emmet Cole came to its possession-filled conclusion on ABC's The River. I am personally looking forward to a second season soon. The show's producers were smart to utilize an HBO-style schedule by shooting only 10 episodes. It kept the pace taut, allowing mysteries to build and conclude without becoming unduly burdensome (do you hear me, LOST? Heroes?).

Tonight begins Long Island Medium on TLC. I don't know much about this show but I suspect it's another tired "reality" program centering around a psychic medium, her obnoxious family and friends, and their LawnG Island accents, which caters to several reality TV memes all in one show.

You won't find anything much on Syfy or the History Channel. The latter now only airs three shows: two about pawn shops and one about loggers.

It would seem that the tide is beginning to turn on paranormal reality shows. There aren't nearly as many as there were even a year ago. But we can look forward to the return of Fact or Faked on April 17th, doubtlessly retooled again. Let's hope that last season's lackluster performance will be addressed.
No comments: Links to this post

Those daring hirsute hunters (or should that be hunters of the hirsute) of the Animal Planet's "Finding Bigfoot" recently landed in Oklahoma to seek out the legendary creature.  Many in the local paranormal and cryptozoological communities have questioned why the show chose the city of Yukon, only a few minutes drive from the Oklahoma City metropolitan area, rather than the southeast corner--an inarguable hot bed of sightings.

From a Channel 9 report:

The Animal Planet show "Finding Bigfoot" made the trip to Yukon, Oklahoma Saturday in search of the mythological creature.
Hundreds of people showed up at Saturday night's town hall style meeting to talk about their own Bigfoot experiences.
Crews for the show arrived in Yukon on Friday. They will be around the area for a week.
The episode featuring Oklahoma will air sometime this summer.
"Finding Bigfoot" airs Sundays at 9 p.m. on Animal Planet
No comments: Links to this post

This was forwarded to me from a colleague. It's an account she wrote at my behest of her sojourn to Newgrange, the prehistoric complex in County Meath, Ireland. . . . 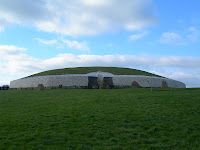 The bus was small but its huge windows provided ample views of the lush green fieldsand rippling hills.  Despite a leaden sky, the colors seem vibrant and the world more intimate.

The Hill of Tara, ancient site of the High King of Ireland, the crumbling Slane Castle, and enough thatched roof cottages, with bright red doors, to make any sightseer giddy.
The curving River Boyne, said to have been engraved in the soil of Ireland by the goddess Boanne herself and the water where the mighty Finn caught the Salmon of Wisdom, was surging and tumbling over gray rocks and hardy fisherman waded its tumult to fill their baskets with a catch of trout and salmon.
Around the small narrow lanes we moved until there was the site older than the Pyramids and Stonehenge, the structure known as Newgrange (dated to about 3,200 B.C.E.).
Aligned to the solstice, its exact purpose is unknown, although researchers suggest it was a place of deep religious significance due to the burial and reburial activities traced there.
It was a mound covering an acre of ground (some 250 feet across, 40 feet high) and surrounded by thousands of pounds of rocks brought there from some forty miles away. Around its parameter were the remains of a one time circle of standing stones. At the entrance the impressive huge stone carved with mysterious spirals and carvings yet to be conclusively interpreted.
The long, rock hewn passage leading nearly twenty feet into the very heart of the mound branched off near its end into three alcoves. Above was the unique corbelled roof of stones.
Cautioned on the tour not to touch the walls, the shadowy interior, and the group of people in the passage meant at one point I was pushed back against the rock face of the passage. When that happened an almost static charge of electricity rippled through me and for a moment it was as if I did not stand in the 20th century but had been catapulted through time and space into the time when some of my ancestors might have helped construct the mighty mound and worship there in the course of time.
Although the mound, like many such locales, has been noted to have increased levels of electromagnetic readings, I noted the others in the group seemed oblivious of any thing but the rain, the cold, and the sights they were seeing. They had not touched the wall of course, but still I had to wonder if they would have experienced that thrill of the mysterious in quiet the same way or felt that rush as time and space flexed around me for that brief- all too short – time
2 comments: Links to this post 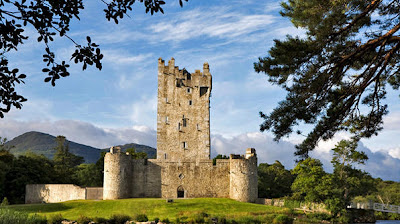 Check out the Travel Channel's webpage for a great slideshow of the haunted and mysterious spots of Ireland, including ancient castles and even older sites filled with mystical energy and strange magic.
1 comment: Links to this post