Remember when kids made their own costumes for
Hallowe'en? It was a simpler, safer, and more
innocent time...or so you'd think. Check out these
vintage creepy AF costumes. All I can say is few
things are as creepy as a pillowcase mask with jagged
holes ripped into it or a crudely hewn papier mache mask. 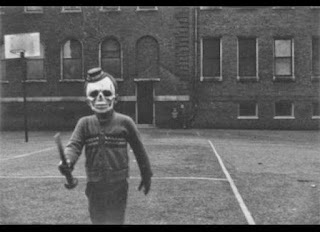 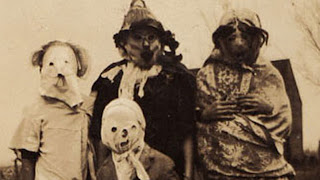 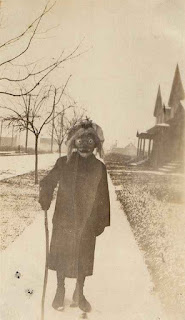 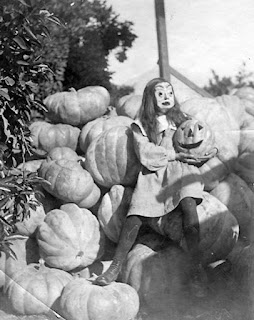 As the story goes, in September 1953 in the town of Morecambe in Lancashire, England a specialist in the nascent technologies of broadcast television picked up an unusually long-distance transmission from Houston, TX. So, too, did others throughout England as they sat about their sets. The station identification placard for KLEE-TV was only up for a moment, but it struck them odd that such a signal could reach them from half a world away. Stranger still, when investigated, it came to be learned that this station had gone off the air three years prior. Where did the signal come from? Where had it been?

Apparently, it hadn't. It seems the whole thing was a hoax.

KPRC-TV in Houston received a letter and a photograph one day from England that read:

"Enclosed herewith is a photograph taken by an ordinary box camera of what I believe is your test signal received 1953. It would be of great interest and help if you could be so kind as to confirm or deny by return mail that this is so and at the same time it would be of great help if you would endorse the back of the photograph and return. Your help in this matter would be much appreciated."

This baffled the staff since it was not only technologically improbable that a signal from Texas would ever reach England (to say nothing of incompatible natures of American and British TV technologies), but KPRC-TV had bought out KLEE-TV back in 1950, changing the call letters at that time. No one had seen a KLEE-TV identification broadcast since.

Hypotheses were trotted out. These included the possibility that English viewers had actually seen an advertisement for Kleenex that had perhaps become distorted. The BBC could neither confirm nor deny that the errant broadcast had occurred. This would have been enough ambiguity to give birth to an urban legend, but experts at the Chrysler Corporation determined the image was authentic and that was all the burning bush anyone needed to pass the tale on as gospel.

But there are problems with the tale. KPRC-TV, for one, received only one copy of what appeared to be a form letter. Similar letters were sent out to stations all over that included these photographs of various station identification cards showing their call letters
. These were sometimes close to but just different enough from the actual cards broadcast by the station that those in the know were suspicious from the start.

In corresponding back, KPRC-TV learned that a hoax was afoot to sell the English on a new type of television that could pull broadcasts from all over the world. To prove this, the hoaxers played various faked call signs from stations in the USA, South America, and even in Russia (all in English, of course) through their sets and encouraged viewers to take pictures as proof and verify themselves that these call letters were real. And this, so the explanation states, is where the letters came from.

But is this the truth? Letters were received, true, but the seemed to be strikingly similar, according to reports, thus bolstering the "form letter" hypothesis that these letters all came from the same source. Was there ever actually a scam to sell these exceptional TV sets that could retrieve signals from all over the globe? Or was that another lay of a more complicated hoax?

It's not hard to see why the legend endures, given that even the supposed known facts aren't much more solid than the hearsay of the original tale.
"Unexplained Mysteries of the 20th Century," Janet and Colin Bord
http://www.snopes.com/radiotv/tv/klee.asp