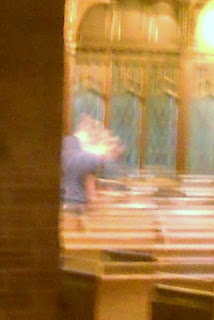 What is seen here in this close up of an empty sanctuary defies explanation.

The image was shot last summer at an old gothic revival church in Oklahoma City. The lighting was too dark for a proper shot of the transept, but the brightly lit sanctuary beyond prevented the flash from firing. This caused the camera to automatically adjust to a slower shutter speed, hence the motion blurring seen here. However, the remarkable thing was the sanctuary was completely vacant at the time.

Blown up, it has the appearance of a woman in a blue, short-sleeve blouse.  Upon interviewing church members, it was learned there was once a woman who fit this description at the church. She frequently sat in those pews until she died in the 1980s.  Subsequent exploration of the area, the image's EXIF data, and the camera could provide no explanations. No other photos emerged with this anomaly present (and one was taken a scant second later without said figure).
An on-location investigation was conducted that brought up some anomalies (pipe smoke in an area where someone who smoked a pipe could be found; the sound of a large group of people talking was heard in the sanctuary as coming from the fellowship hall in the basement, but an investigator in the hall heard nothing; furtive figures glimpsed in choir lofts, etc.)
2 comments: Links to this post

There is a mournful funeral gathering in a gothic church beneath high vaulted ceilings, stained glass windows and finely crafted wooden paneling and fixtures.  The Celtic cross high atop the looming entrance along with its stained glass window, sets the right feel as mourners and casket leave while a stranger utters grim warnings.... 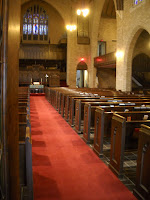 In November of 2005, an Oklahoma City newspaper article informed citizens that a film would need extras for various scenes.[1] There was an intriguing list of roles from bar patrons to strange robed cult members.  A few days later another article appeared explaining that a horror film would be using locations in Oklahoma City and nearby Guthrie.[2]  One of those settings, the church described above and seen in the trailer, was Wesley United Methodist Church.  [3]  So, in 2005, the church became one of two Oklahoma locations for SOUL'S MIDNIGHT.
﻿
﻿
The church, located at NW 25th and Classen Boulevard, had been founded in 1910 as the Wesley Methodist Episcopal Church, North.  The impressive pure English Gothic sanctuary with its numerous stained glass windows had been built in 1928.  Inside the sanctuary, which is classic cruciform in shape, are hanging lights, classic exposed ceiling beams, over 800 uses of the Gothic arch.   The original wood pews, railings and paneling remain and are a dark rich walnut tone.[4] Little wonder the movie producers wanted to use the location for setting just the right gothic tone. 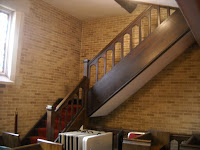 In fact, some members of Wesley did participate as extras playing mourners and mad cult members.  Several can be seen in the funeral scene inside the church and then again as they loaded the casket into the hearse at the curb.  They remember the experience as very thrilling, intensively fun and very interesting.   It was also somewhat controversial with members if the “establishment”. [5] That, however, merely added to the mélange of the strange of the story.  Controversy stemmed from using a church for such a secular activity with such a demonic inspired storyline. 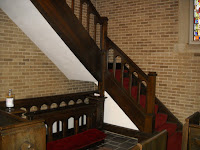 Soul's Midnight (2006) was produced by Brothers Cleveland Productions and Graymark Productions in association with Image Entertainment, with executive producer Gray Frederickson (The Godfather). It was directed by Harry Basil (4th Tenor, Funky Monkey, Fingerprints).    The tale of Gothic vampires, ancient ritual cults and supernatural menace was written by Brian Cleveland and Jason Cleveland.  Cast included international film star Armand Assante (Odysseus, The Mambo Kings) who is both an Emmy and Golden Globe Award winner.  He is also well known as a Global Landmine Activist seeking to remove this danger and save lives.
﻿
﻿
Also featured were Robert Floyd (Sliders, Godzilla) , Lucila Sola (Pride and Prejudice) , Miguel Perez ( Ocean’s 11, Blow, Million Dollar Baby), Elizabeth Ann Bennet (Liberty Heights, The Passing) and Joe Nipote (Viper, Casper).  Music was supplied by Ceiri Torjussen (The Canal, Scary Movie ii, Devil’s Dozen).   [6]
Although not considered great horror cinema, the film is entertaining and plays well with the classic symbols and motifs of the vampire mythology. Its low budget and flat story line seem to be the most commented on aspects.  Horror films, however, seldom rise to the levels of academy award level content or technique.  This one is one presents a more than capable cast with a not too bad a script and the result is an enjoyable time in unique slant on a horror theme.

As a smaller, independent film it can be entertaining and especially so for anyone with ties to the Oklahoma City and Guthrie areas.  Especially, to those with ties to the historic church at NW 25 and Classen.  Obviously inspired as much by Anne Rice as Bram Stoker the film is a fun addition to anyone’s collection of vampire films, Oklahoma City films, and the odd and the quirky.  Just another in a series of what makes Oklahoma a little strange. 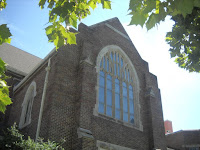