Weirdness From The Web--But Is It To Be Believed?

The following stories were gleaned from posts on Pinterest. Amid a jumble of re-posted images bearing obviously faked iPhone ghosts and clearly staged CGI videos of extraordinary feats, a gem or two glistens. If not terribly veracious, they at least tantalize the imagination...

The Michigan Triangle is purportedly and area of mysterious forces and unexplained phenomena that ranges from Benton Harbor in the south to Sheboygan and the Pentwater area to the north. In 1937, Captain George Donner of the freighter O M McFarland disappeared from his locked cabin while the vessel was en route to Port Washington. It's been claimed that it was the captain's 58th birthday. In June 1940, a Northwestern Flight disappeared in the triangle--with 58 passengers aboard.

The Lincoln Tunnel Vortex is an Internet legend that has cropped up over the years concerning the much-trafficked tunnel that connects Manhattan to New Jersey. If the tale predates cyberspace is unclear. According to some, the tunnel is the home to a mysterious, unexplained incident that has been unsurprisingly "covered up".

Supposedly, the John Lawson House in Wappinger Falls, NY is home to no one but a few mannequins that have the unnerving capacity to move about by themselves and even change their clothing.

Another apocryphal tale from online is that of a Caucasian man who arrived at the Tokyo airport in July 1954 with a legitimate looking passport from a country called Taured, which doesn't exist. The Tokyo officials ask him to show them where on a map this supposed Taured is located. The man points to Andorra but is confused and frustrated that the map doesn't say Taured, a country that had existed, according to him, for over a thousand years. The man had money from various countries on him and his passport had been stamped in those countries as well as previous stamps for Japan. The Japanese officials placed him under guard in a local hotel as they checked out his story. While he had plenty of documentation to support his assertion that he was there on business, the company he claimed to work for had never heard of him. When the Tokyo officials returned to the man's guarded room, they were shocked to discover that he had vanished.
No comments: 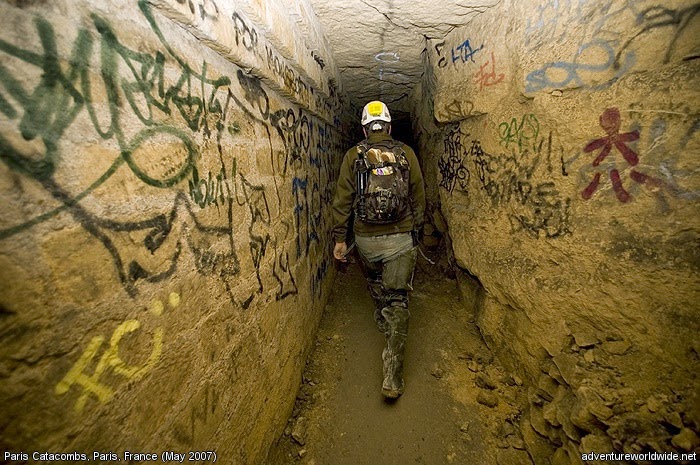 In 2004 Paris police discovered a movie theater / restaurant in a large, previously unknown cavern beneath that city's elite and wealthy 16th Arrondissement, near the Trocadero.

Over 170 miles of tunnels, caves, and catacombs snake out like roots beneath the ancient city and it's the police's job to patrol this labyrinth.

At the close of summer, one squad entered a drain next to the Trocadero and discovered a tarp marked "Building Site, No Access" concealing a tunnel. At its mouth, a closed-circuit TV camera was set upon a desk to record the presence of any intruders. Moving beyond that, the squad triggered a remote mechanism that loudly played an audio recording of angrily barking dogs.

Obviously, someone was going to great lengths to dissuade the average curious visitor. But the Paris Police were undaunted and ventured further in.

Following the tunnel some ways, the squad found themselves suddenly with in a large cavity that had been further carved out to resemble an amphitheater. The seating was arranged to face a large movie screen with projection equipment and video cassettes of films ranging from 50s noir to recent blockbusters.

Above their heads, scrawled in the soft stone, were strange symbols that included Swastikas, Celtic Crosses, and Stars of David.

Next door, in a smaller chamber, were tables, chairs, liquors and a pressure cooker that had been used to make couscous.

Moreover, the whole operation was powered by a professionally installed power. There were also three phone lines.

Baffled by the strange find, the unit retreated to inform their superiors. Three days of bureaucracy
passed before Police could once again venture down to the secret chamber.

To their shock, the phone lines, power cables, and equipment was all gone. The only thing left was a note on the floor that read: Do not try to find us.

It isn't clear who was responsible for the occupation of this lost cavern. It is unlawful--except in certain spots--to enter into the Paris Catacombs, but this doesn't stop everyone. Many urban explorers venture nightly into the warren of tunnels. One such group, known as the Perforating Mexicans, claimed the underground cinema was theirs. A photographer named Patrick Alk, who published a photo essay on the tunnels, claims it was another group altogether. He further adds, that there are many other areas of the underground still undiscovered by the public at large.
1 comment: