In watching a recent replay of Fact or Faked's attempt to debunk the famous Battle of Los Angeles photo, I was struck by something that never seemed to come to the team's attention.

The photo, which shows search lights and a barrage of military fire converging on some unknown object, made headlines in the months following Pearl Harbor. The army had received intel that enemy craft were spotted offshore and another Pearl Harbor like situation was about to rain down on this famous SoCal city. However, despite a seemingly endless volley of bullets and larger shells, the mystery object never plummeted to earth.

While I don't discount that something strange happened that night. In fact, I am sure it did. I wonder about the experiments the team designed and their evaluation criteria. The reason for this is that, to me, the image always looked doctored. No, I don't mean hoaxed--I mean doctored. Having much familiarity with photos and darkroom techniques as well as the history of such things. I can say that this famous image always looked dodged in order to bring out the details better when it was transferred to press. At the time, printing presses on newspapers weren't as sophisticated as they are today and images often lost detail. Given that the battle-ridden night shot wasn't the most ideal situation to shoot, it is likely (again, to me) that the image would have been enhanced to show detail better when printed.

The team kept pointing out that the brilliant search light beams seemed to end at the craft, as if it were solid and opaque. However, I wonder if when the image was dodged, an artistic choice was made NOT to dodge the beams across the entire field of view, in effect forcing the creation of the very artifact Fact or Faked was trying to study.

It's just a thought. I've never seen either a good print or the original negative. I can't say for sure. Still, I wonder......
1 comment: Links to this post

Big Cat In The Big T

A mountain lion is captured in Tulsa, OK. http://www.texascryptidhunter.blogspot.com/
No comments: Links to this post

Over at UFOIconoclast(s), the gang likens the Roswell incident to a corpse reanimated by imaginative writers decades later.  The truth, they argue, is that the whole event was a non-issue almost from its inceptions and that its history is little more than the florid scribblings of modern writers. Take a look....

Phoenix Scientist, However, Says Relics Do Not Antedate Spaniards

Tucson, Ariz., Dec. 14. [1924]--(AP)--The University of Arizona will take over the work of excavating at Nine Mile Water Hole, the scene of the unearthing of leaden crosses and implements of war which some scientists declare indicate the discovery of America by Roman Jews in the eighth century.

This announcement was made Monday night by Charles Menifer, one of the original discoverers of the relics that were found buried in calich or desert limestone.

Work of unearthing additional relics will be under the direction of Dr. Byron Cummings, head of the department of archaeology at the school, who supports the theory that the discoveries were genuine and that they indicate discovery of America long before Columbus' time.

The lime kiln under which the relics were found had been placed under guard by university authorities until further research work is resumed.

Dr. O. A. Tunney, Phoenix scientist, Monday announced that after a careful study of the relics it was his opinion that they did not indicate the discovery of America before the coming of Columbus.

Doctor Tunney admitted that the relics probably were several hundred years old but declared he did not believe they were of pre-Spanish origin.

The scientist asserted that the limestone in which the crosses and implements was found was formed within the last few hundred years and on this theory bases his belief that they could not have antedated the coming of the Spaniards in to the southwest.

Salt Lake City, Dec. 14--(AP)--Finding of leaden crosses and other evidences of early civilization near Tucson, Ariz. has been the subject of careful study by archaeological students of the University of Utah and the Mormon church.

"Improvement Era," official publication of the church for July, 1925, contains a special illustrated article by J. M. Sjodahl, former editor of the Desert News, in which dates in the inscriptions found on the undearthed articles are described as presenting "an extraordinary coincidence with the chrnology of the Book of Mormon."

After telling of the finds, the first of which was unearthed, according to the article, September 13, 1924, and reproducing the Latin inscriptions, the article gives "suggested translation of the inscriptions."

One of these reads "Benjamin governed the people.  to Seine Roma they came of the gauls, the bravest ***Benjamin*** imparted of religion to the multitude is slain by Thebans.  This I heard 500 years afterwards--after the mountain."

Inscription on another cross bears the date "A. D. 880" and referes to a battle within walled city, and makes reference to Israel and Jacobus.
1 comment: Links to this post

"Put a powerful magnet against the side of your head and it can interfere with the neurons working underneath. The technique is being used to treat severe depression, but it can also produce some nifty party tricks. In this video, a magnet held to left side of New Scientist editor Roger Highfield's skull interrupts his ability to speak a nursery rhyme. But when Highfield sings the same rhyme, there's no effect. That's because the neurons that control speech and the neurons that control singing are in separate parts of the brain. The magnet disabled Highfield's speech centers, but left his ability to sing untouched." More at Boing Boing

Mysterious Universe asks: 'Black Eyed Kids: Insidious Threat or Myth in the Making?'  You may have read my posts on the BEK phenomena.... Check them out HERE

And Anthony Bragalia delves into J. Edgar Hoover's 'Saucer Secrets' over at UFOIconoclast(s)
1 comment: Links to this post

April Fool's Day joke? Maybe not. According to several sources, a Scottish teacher and his students were out on the pitch when dozens of worms suddenly fell from the clear skies above. Later, other teachers reported more clusters of fallen worms elsewhere around the school. While the fall, as forteans call such things, coincided with a recent weather change, the skies themselves were quiet and clear the day the worms came. Throughout history, as the famed anomalous Charles Fort noted, falls of fish, worms, frogs and even more bizarre things have been reported. Still, this account's proximity to that day which so infamously demands we all be made fools does caution some. I might be one of them.
1 comment: Links to this post 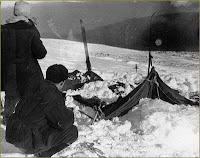 LONDON -- Director Simon Fellows (Malice In Wonderland) will direct an adaptation of Alan K. Barker's book Dyatlov Pass, based on true life events which saw nine students die in unexplained circumstances while ski-hiking in the Ural mountains in 1959.


The Dyatlov Pass incident refers to an unsolved mystery that occurred in the northern Urals which saw a group of ski hikers tear open their tent from the inside and leave barefoot in a heavy snowstorm. Though there was no sign of a struggle, two victims had fractured skulls, one was missing her tongue and clothing belonging to the victims contained high levels of radiation.

Soviet investigators concluded that "a compelling unknown force" had caused their deaths.

The production is anticipated to shoot next summer in Eastern Europe.

When one reads about a reported UFO, it is generally some sort of vague light.  When a craft of any description is recounted, it is of the large triangular or saucerian type; or it is the unimaginably huge "mother ship" variety.

Not so for the craft spotted in October 1969 by Alastair Mackenzie.  The man and his family were enjoying the evening on the hotel balcony in Bournemouth, England when they spotted a jellyfish-like object that hovered nearby momentarily before heading out to sea, floating only about 2 feet above the water.

Mackenzie describes the object in the terms of a jellyfish. Does this imply a mere resemblance, or did he mean to suggest the object was alive in some way as well?  Could this have been a small craft? A probe? And its vanishment over (or into) the sea certainly would have Ivan Sanderson crying USO!
1 comment: Links to this post