THE VANISHING OF GERRY IRWIN

On February 28, 1959, US Army Private Gerry Irwin, a Nike missile technician, had been driving back to El Paso's Ft. Bliss from leave in Nampa, Idaho when he spotted a bright object streak across the sky over Route 14 in Utah. When the glowing object disappeared behind a nearby ridge, Irwin feared it might have been a downed aircraft. He pulled over and wrote a note indicating he went to investigate a possible crash, which he placed on the steering wheel of his car. He then wrote STOP on the side of his car with shoe polish and headed into the night.
Some time later, a Fish and Game inspector stopped when he saw Irwin's car. After reading the note, he inspector headed for the Sheriff's station in nearby Cedar City. Less than an hour later, Sheriff Otto Pfief and a contingent of deputies and volunteers headed after Irwin. The men hadn't traveled far when they found the Private laying unconscious on the ground. He was rushed to a nearby hospital where Dr. Broadbent examined the officer, declaring him to be in good physical condition. It was unclear as to why the man had lost consciousness.
A day later, Irwin finally awoke. He was confused and frightened. Where was he? What happened to the plane crash? He also seemed to be missing a jacket. Those who found him, however, related that he had no jacket on when he was found.


Once he was feeling better, Irwin--still with more questions than answers--returned to Fort Bliss where he was admitted to William Beaumont Army Medical Center for further analysis. He was again released for duty but within minutes of walking back to the base, Irwin again passed out. He was taken to El Paso's Southwest General Hospital. He awoke the next day, asking if there were any survivors.


Irwin went back to William Beaumont hospital where he remained for over a month for psychiatric evaluation. As before, no ailment--physical or mental--could be discerned and he was discharged.


Immediately after release in mid-, Irwin went AWOL. He boarded a bus for Cedar City, UT. Upon arrival, he returned to where he had seen the light crash. As he examined the site, he suddenly found his missing jacket draped over a bush. In one of its buttonholes was a pencil with a piece of paper wrapped around it. It's not known what the paper said. Irwin didn't say when he later turned himself in to Sheriff Pfief.


Irwin was sent back to Fort Bliss and endured further psychological evaluations that revealed, as before, nothing unusual. He was again released, but this time he did not return to duty. Ever again. By September, Irwin had officially been written off permanently AWOL.


As far as anyone knows Private Gerry Irwin has never been seen again.
No comments: 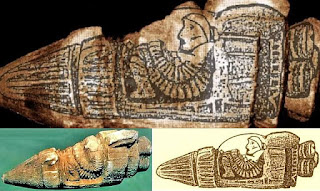 An artifact from near Toprakkale, Turkey near Syria has been a favorite among ancient astronaut theorists for years. Some claim it to be over 2000 years old; others believe its a complete hoax. Superficially, the stone carving appears to depict a humanoid figure in corrugated clothes sitting or crouching within a rocketship--complete with nose cone and thrusters. There isn't a lot of good information on the artifact, as very little original research has been done. It's the sort of story that gets cast out into the river of information to wash up as the truth elsewhere with little examination of its origins. If you Google it, you'll find scores of webpages that have copy and pasted the same exact article over and over, presenting it as their own. I hate that. It's the worst kind of plagiarism. BTW, if you're not reading this on Strange State, then a similar fate has befallen my writing. If anyone knows of a reputable site or (god forbid) and actual book with details concerning this enigma (you know, actual names and dates, etc...), let me know. It's a curious artifact, and I'd love to know if its genuine.
No comments: 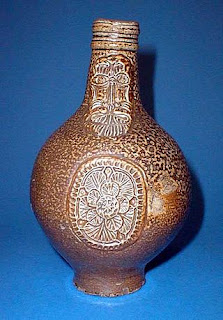 Witch bottles date back to at least the 17th century and were used as a protection against witches. The tradition comes from England, but examples have been found during the excavation of colonial American sites. These innocuous glass bottles or clay jars were filled with an assortment of magical countermeasures, including the urine, hair, and nail clippings of the person needing protection. Later, rosemary (a warding herb known since Roman times), needles, and wine were included as well as sea water, dirt, stones, knotted threads, feathers, salt... Frankly, the list goes on. If it has a magical connection, it was probably tossed in. Some early examples were a simple stoneware, glazed with salt, and embossed with the visage of a bearded man. These bottles were secreted away within the walls of the house, beneath its hearth, or buried at the edge of the property. Some were tossed into a fire to break the spell focused on its owner.
No comments: