Johnny Frank Garret, a mentally handicapped man from Amarillo, was executed by the State of Texas for the rape and murder of Sister Tadea Benz, a Catholic nun at St. Francis Convent, on the morning of October 31, 1981 when he was 17 years old. Garret claimed he was innocent throughout the whole ordeal. Despite requests for stays of execution and even an appeal for clemency from Pope John Paul II, Garret was executed by lethal injection on February 11, 1992. Later, DNA evidence and follow up investigations pointed to Leoncio Perez Rueda as the true culprit.


According to legend, among Garret's final acts was to pen what the Austin Chronicle termed a "theatrical curse" on all those who had a hand in this injustice. And if may have actually come to pass. A number of the attorneys, jurors, and others associated with the case have died peculiarly since his execution. Others found themselves surrounded by tragedy.


One juror's daughter died from an accidental gunshot wound to the head while his sister was killed by a drunk driver. Several jurors and lawyers died of cancer. Medical Examiner, Ralph Erdemann, was convicted of several felonies, including falsifying autopsies. Both a fellow inmate of Garret's and his former school teacher testified against him. They both committed suicide, as did the District Attorney Danny Hill. His daughter hanged herself a few years after. Another attorney's wife committed suicide and his son was accidentally locked inside a hot car, causing permanent brain damage.


Of course, if you take a given group of people over an indeterminate number of years, you will start to rack up a body count. It's the only certainty of life: no one gets out alive. The pool of people associated with his various trials and investigations might run into the hundreds. If 15 of them find themselves embroiled in tragedy, can we really blame that on a curse?


Then again...
No comments:

In 1978 Soviet geologists prospecting by helicopter in remote regions of Siberia discovered a family of six in the forest. The group, which had been living in a primitive dugout with a sagging timber roof, had been so isolated they were unaware World War 2 had ended.

The Oxford Electric Bell has been running continuously on a dry pile battery for nearly 180 years at Oxford's Clarendon Laboratory--and scientists aren't quite sure why.

Transient Lunar Phenomena describes the unexplained flashes of light sometimes seen on the surface of the moon for as long as history records. Theories range from meteor strikes and outgassing to electrostatic events and even aliens.

According to one source, there are over 100 flying saucer patents files over the last 100 years and from around the world. It makes one wonder how many have been responsible for sightings.

Potpourri of the Peculiar

The oddly named Quackers (a Russian onomatopoeia for the sound of frogs) are strange, croaking noises reported by Russian submariners. Most of these reports came out of the North Atlantic and Arctic Ocean. Icebergs calving? Ultra Low Frequency broadcasts? The jury is out, but Quackers joins other oceanic anomalies such as the famous "Bloop" in showing us how weird the oceans are.

It is thought by some that a Roman legion was captured in a failed attack at the Battle of Carrhae early in the First Century. The victorious Parthians (an ancient Iranian culture) conscripted these Romans into fighting as mercenaries at the Battle of Zhizhi along the border between present day Kazakhstan and China. From here, the Romans may have settled in Zhelaizhai (now Liqian), as many of the modern-day residents of this area claim to be descended from Roman soldiers.


A mastodon discovered in 2017 at the Cerutti site in San Diego County, California dates to 130,000 years ago. But the remarkable thing are the indicators that suggest the animal may have been killed by humans, pushing the known timeline of the Americas back far beyond the current consensus.


Off the west coast of Cuba lies an unusual feature that some believe is a lost sunken city. Sonar scans of the area in 2001 revealed structures that could be interpreted as a city with pyramids. National Geographic editor John Echave said the scans showed "interesting anomalies." So far no one has taken samples or dived on the site, so perhaps in the future we will learn more of this intriguing enigma.


In August 2005, a small mummified body was found in the ruins of the ancient Persian settlement of Makhunik in present-day Iran. According to some reports, the village was replete with scaled-down architecture, suggesting this may have been the home of a dwarf people. A similar site is rumored to exist in Iran's Kerman Province as well. Archaeologists who have studies these sites dismiss the notion these are dwarf cities. Others state the mummy wasn't a dwarf either; it was simply the body of an infant.
No comments:

THE MYTH OF THE WAR OF THE WORLDS PANIC

This past Halloween marked the 80th anniversary of Orson Welles' production of H. G. Wells' "War of the Worlds" for The Mercury Theatre radio program. If you aren't familiar with the tale of Martians invading Earth, then you're at least likely to know the story of the panic that this ersatz news broadcast generated. Or so we're often led to believe. The truth is far less dramatic.

The radio play--done in the style of an actual news report--aired at Halloween with all the requisite disclaimers informing listeners but if you tuned in late, you might be forgiven for thinking the world was coming to an end.


And so the story goes that millions of listeners lost their ever-loving minds over this fake broadcast. However, in reality, hardly anyone was fooled by the broadcast. In fact, the broadcast didn't have a large market share and was in competition with the much more popular “Chase and Sanborn Hour" on another network.

Much of the hoopla surrounding a supposed panic arose from newspapers at the time, which saw an opportunity to undermine their chief competitor (radio) and reclaim a chunk of their lost business. The increasing popularity of radio as a source of news and entertainment was hitting print media harder and harder as each year passed.

So by lambasting the radio drama as a source of fear-mongering and consternation, the newspapers of the time were able to paint the whole of radio with a broad brush of distrust and misinformation.
And they sold it well.

80 years later, most people are still under the impression that the War of the Worlds broadcast fomented a panic theretofore unseen in the annals of human history. And whenever someone dredges up the old tale at Halloween or such, it all gets regurgitated because their primary sources of information are...you guessed it. Newspapers. When the written record is largely comprised of false accounts, it's easy to see how people decades removed--people accustomed to trusting newspapers--might believe that one little radio broadcast in 1938 nearly destroyed a nation.
No comments: 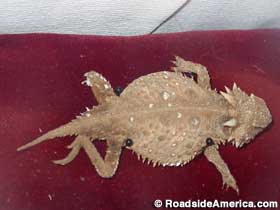 On February 1928, as the courthouse was being preparing to be demolished, the time capsule was opened in front of 3,000 witnesses. The contents were removed and displayed for those in attendance, including Old Rip who was held aloft by a local minister. As the man held the animal by one leg, the spectators were startled to see its other leg slowly twitch into life. In a matter of moments, the horned lizard then puffed up in a strategy of defense common for its kind.


Shortly thereafter, the amazing spectacle was taken on the road as a side show, eventually touring the United States. Even then President Coolidge marveled at the miraculous lizard.


Unfortunately, after 11 months of the tour circuit, Old Rip died. To commemorate the animal, he was taxidermied and placed inside a tiny, velvet lined coffin and displayed in the new courthouse. Aside from being briefly stolen in 1973, Old Rip has remained at the Eastland County courthouse ever since. You can still visit him today. But some say, when the lights are turned off and all is quiet, you can still hear...Naw, I'm just joking.
No comments: