The Devil Wore A Fierce Black Sweater (might have been Dolce)

I don't know if this is a work of fiction or not. I discovered the following story on about.com's paranormal phenomena section, which is largely "true" accounts, so I am going to assume the intent of the tale was truth.

In  1995, Ami and her friends attended a Southern Baptist summer camp at Wilderness Creek in the Arbuckle Mountains of south-central Oklahoma.

The first few days were quite ordinary but one night as the children convened for an evening worship service, several noticed a boy standing several yards away the services. The boy, approximately 17 or 18 and clad in black, wasn't familiar to Ami or her friends. Looking more closely, she and her friends noted that he was even wearing a black sweater, which was quite odd for a summer night in Oklahoma.

Within a few short moments, the children began feeling ill and soon were doubled over in pain. The children were taken to the infirmary. One of the children was even rushed to a nearby hospital.

One of the children, Byron, was released from the infirmary as he began feeling better. He headed out into the night. To the others, it seemed as if something were troubling him beyond the illness he felt.

Later, in the cabin, Byron confessed that the boy in black wasn't a boy at all. It was an entity known as Ara that had oft possessed him over the past few years.

Months later, as summer was winding down, Ami and her cousin were spending time together in Ami's room when her cousin glimpsed someone in the backyard from Ami's window. Ami immediately thought of Byron because he had called recently to say he was going to visit.

But her thoughts were suddenly upended as a disembodied voice suddenly spoke to, tossing her into a sort of delirium wherein she believed herself pregnant and that voice wanted to kill the unborn child.

Ami explained the situation to her cousin and being good Baptist girls they decided to work a little witchcraft. Ami decided to perform something called a "seeing ritual," which would allow her to see the truth in things, revealing that which would otherwise be hidden.

The ritual sent the girls into a trance in which they saw a vision of Ara at a fork in the road, leading off into two distinctly different vistas: one good, the other far from it. Ara told the girls they could choose whichever path they wanted. Suddenly, in Ami's version of the vision, she was walking down the hall in her home and entering her bedroom to see herself and her cousin as they must appear at that moment from the outside. She watched in horror as her vision cousin suddenly snapped the vision Amy's neck.

At that moment, the two girls awoke from the trance and had barely composed themselves when the doorbell rang. Byron had come calling.

He wasn't alone either. A girl named Brandy had joined him.

Byron showed no surprise when Ami said that she and her cousin had been visited by Ara. "I know," he said. Byron related his own recent visitations from Ara and how the entity wanted him to sexually attack the girls to obtain their "purity".

[Cautionary note to young girls. When a boy comes calling and talks of the evil demon that wants him to rape them, you might want to get away and find an adult whom you trust and not do what these girls do next.]

Byron claimed he resisted Ara's demands. [Okay, not hard to imagine. This whole story is one boy with a lot of girl---big space---friends. Unless Ara's demands involved putting together a fierce outfit, I think they may be safe after all]

His friend Brandy at this point explained how she had read that a type of demon known as an incubus could rape a woman without the need to possess a human body.

For some unexplained reason, Byron decides to lay down on the floor and summon Ara inside him. [ahem]

At this point, Ami is fed up with all this and beginning to think Byron has been playing with their minds. She handed Byron a bible, but upon grasping it, he suddenly cried out in pain, explaining it had burned his hand. Ami was about to roll her eyes when she noticed there were marks on her bible in the shape of the boy's hand.

Throughout the following week, Ami experienced further strange events: a ouija board session [groan] only ever spelled out the word ARA; she had several waking hallucinations [Shrooms!]; and some rather bizarre dreams.

For Ami, this was a wake-up call and she stopped dabbling in the occult, doubtlessly tossing her Parker Bros ouija board in the trash and collecting her receipts to return those skull leggings to Hot Topic. She never saw Byron again. The last she heard he was undergoing some white magic ritual to cast Ara out. She never knew if it was successful, but she did later see a flyer on a rain-sodden street heralding a drag queen named Ara Byron's Night of Pandemonium.

Okay, that last bit was an ounce of levity on my part. There are some gaps and inconsistencies in the story the make me think bad fiction. But maybe something weird did happen to this happy-go-luck band of Baptists. Maybe there is somewhere a 17 or 18 year old looking boy dressed in unseasonably black attire waiting to infect the the innocent among us.
1 comment: 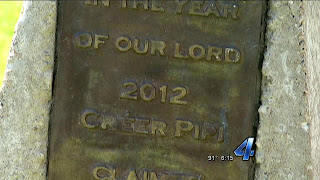 Recently in the Paseo (an arts district of Oklahoma City) a roughly fashioned concrete monument weighing approximately 100 lbs showed up mysteriously on the lawn of the Paseo Grill.

What makes this weirder is the plaque affixed to the monolith, which reads: "In the year of our lord 2012 Creer Pipi claimed this land for azathoth". Azathoth, for your edification, is an eldritch deity from the demented pantheon of horror master H. P. Lovecraft whose classic works of weird terror in the 1920s and 30s have inspired pretty much everyone since.

Is this a strange bit of guerilla art? A practical joke? Or does the Cthulhu Cult yet live?!

Sad thing is the Grill wants to toss it out. Whatever. It's awesome and fun and whimsical and adds an element of funky surprise to an otherwise generic, desperate to be like one of the cool kids brand x of a city.
No comments:

Classics Too Good To Die

Although often subjected to ridicule, he was one of few people to take a global look at civilization rather than a nationalistic view. 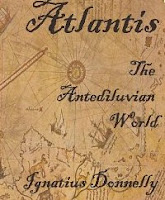 He accepted that there was cultural diffusion as one culture influenced another, ideas, stories, and beliefs were thus spread widely in a time without nation states or nationalistic boundaries. He was definitely one to think outside the box rather than become too root bound into the contemporary and rigid thinking of the science of his day.

While lacking in some skills, and a tendency to accept too much at face value, his ' what if we look at it this way...' approach is the epitome of what true science should do.

Despite his being derided by some he did bring up intriguing questions and examples that seem to reveal what modern science is only now beginning to accept - ancient society was more mobile and more far traveled than previously thought.

Available from a library or Amazon.com
No comments: