If you like your strange but true a bit more true--and a lot more dark--then you should check out this blog. While still fairly new, it has nonetheless managed to collect some truly morbid, weird, and disturbing tales. Some of these you'll recall from posts on here, but some are completely new to me as well. I was enjoying perusing the many dark offerings over at Real Life Is Horror
3 comments: Links to this post

Undead Beliefs Among The Taino People 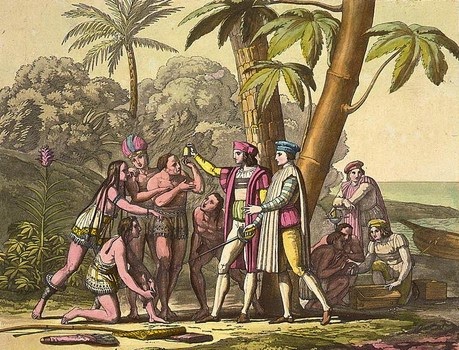 In researching the origins of zombies for a work in progress, I ran across an interesting assertion that this tradition doesn't come from African slaves, as is oft-cited. The premise is that beliefs among the local Taino people are, in fact, the impetus for the belief in dead persons who can be revived and controlled through sorcery. The primary source for this argument is the chronicle of Fray Ramon Pane, a Catholic priest in Columbus' retinue on the island of Hispaniola. In reading through his writings, I have found the following observations of Pane's that might illustrate this point.

"They believe that the dead appear on the roads to those who walk alone, but when many go together, they do not appear."

"They believe the dead go to a place called Coaybay on the side of an island called Soraya."

"When a person is alive, they call his spirit goeiz; when he is dead, opia*"

"There are certain men among them, called bohutis [who claim] they speak with the dead"

"How the dead man's relatives avenge themselves when they have had a reply through the sorcery of the potions. The dead man's relations assemble on a certain day and lie in wait for the said buhuitihu, give him such a thrashing that they break his legs, arms, and head, and leave him for dead. At night, they say, there come many different kinds of snakes--white, black, green, and many other colors--that lick the face and whole body of the physician whom the Indians have left for dead. This they do two or three nights in succession; and presently, they say, the bones of his body knit together again and mend. And he rises and walks rather slowly to his home. Those who meet him on the road say, "Were you not dead?" He replies that the cemies [totems or idols representing deities] came to his aid in the shape of snakes. And the dead man's relations, very angry and desperate because they thought they had avenged the death of their kinsman, again try to lay hands on him; and if they catch him a second time, they pluck out his eyes and smash his testicles, for they say no amount of beating will kill one of these physicians if they do not first tear out his testicles. "

-- Fray Ramon Pane, Hieronymite Monk in the company of Cristopher Columbus, writing about the Taino people on the island of Hispaniola, c. 1498.

* From which the modern Caribbean term for spirits, obeah, is derived. Variations (hupia, et al) can be found throughout the Caribbean, all tracing their origins to Taino culture.
2 comments: Links to this post