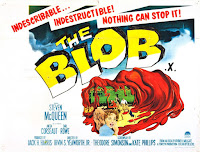 One night in September 1950, two Philadelphia police officers spotted a glittering disc as it descended from the sky. The pair assumed it was an errant parachute. However, when it landed the officers were astounded by what they saw. The "parachute" was actually a pulsating, scintillating disc of some gelatinous substance approximately 6 feet in diameter and 1 foot thick in the center. When one of the officers tried to take a sample of it, the substance crumbled in his hands and evaporated. All that remained was a sticky residue on his fingers. Within 30 minutes, the disc had wholly evaporated. Later, this incident would inspire the classic 1950s horror film, "The Blob."

An article from discovery.com in 2009 recounted a similar enigma in Manhattan. In this instance, large globules of soap foam were spotted falling from the sky. Upon investigation, it was learned that maintenance workers were cleaning a ventilation system on the roof of a nearby skyscraper. Foam nearly fits the description of what the officers saw that night in 1950: It is light enough to descend from the sky slowly, its buoyant composition would lend it a jiggle some might call pulsating, and the tiny bubbles would produce a scintillating effect when the officers shone their flashlights on it. Furthermore, it would dissolve quickly and leave behind a sticky residue in ones hands should it be handled. Very large chunks of a similar soapy substance were recorded blowing around the Doukkala region of Morocco in 2016. Some said industrial soap foam was responsible here as well. Others theorized it was seafoam washed inland on strong breezes.