Ring In The New Strange Year

Happy New Year's Eve all. I hope you're gearing up for a safe, fun, and maybe even strange celebration. 2012 will see the end of the world (LOL! Read my tags on Doomsday, Armageddon, Mayan prophecy and the like for more) and the 1,000 year anniversary of an Oklahoma runestone. I'm sure as end of days mania heats up, 2012 will see some strangeness. I only hope that no suicidal/sacrificial cults arise as they tend to do in such times.

For my last post of 2011, I will share a few anecdotes I read at the library yesterday in a book on Alabama....

Many apparent outdoor shots (the mountain highway for instance) in close Encounters of the Third Kind were actually sets erected in a hangar at Mobile, AL's Brookley Air Force Base.

Furthermore, between April 1950 and June 1954, Brookley was the epicenter of a rash of "real" UFO sightings.

One particularly interesting incident occurred in August 1952 when several objects were reported by disparate eyewitnesses--accounts confirmed by Air Force radar.
2 comments: Links to this post

Yeah, yeah, buddy. Save it for your cell mates down at the station. 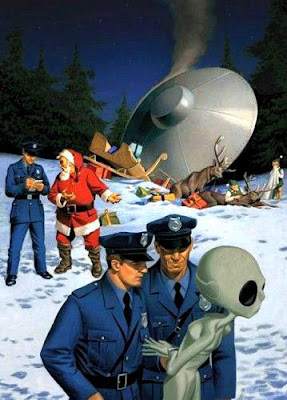 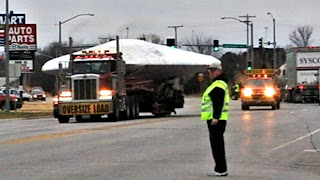 Anyone have a clue what it could be? At first, I thought it was the disc that sits atop an AWACS jet but then I saw better its strange shape. The fuselage to a fighter jet? I've seen those carried down the road, but they aren't that big. Thoughts? READ MORE HERE

"Several demonstrators in the crowd espied [sic] the hovering object, with reflecting blue and red lights. Descriptions of the object--which observers say was definitely not a helicopter--included 'five extended tendrils or pylons emanating from the body of the vehicle.'" Eric Pfeiffer, The Sideshow (via Yahoo!)
No comments: Links to this post

Phantoms and Monsters explores the myth and mystery of the 'Yucca Man', a hirsute beast legendary to the Joshua Tree National Park. CLICK TO READ MORE
1 comment: Links to this post

Author and blogger Ken Summers reveals the secret behind a supposed ghost image captured at the White House. Read more about his analysis at Who Forted?
1 comment: Links to this post

The other day, I drove over to New Orleans for the afternoon. It was unseasonably frigid, but I enjoyed myself despite the cold. It was better, in fact since the temps kept the usual drunken crowds at bay. Even the ghost tour seemed small. But I suppose it was mid-week on a cold December night. I saw one of this outfit's brochures earlier in the day. They claim that 90% of participants return with pictures of paranormal activity. I suppose if that activity includes "orbs", then they can stand behind that claim. But the streets do seem darker, more dangerous with the revelers at bay, as if each shadowed alley becomes home to spirits of the night--or muggers.
1 comment: Links to this post

This is a giant weta, an insect found on New Zealand's Little Barrier Island. But this isn't just any giant weta. It's reportedly the largest ever found, weighing in at 71 grams. BOING BOING
1 comment: Links to this post