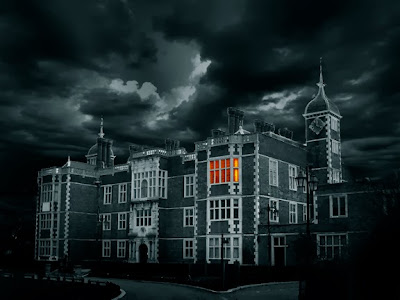 Once a stately manor in the Greenwich borough of London, Charlton House was completed in 1612 for Adam Newton, a royal tutor. In 1680, ownership of the grand home went to Sir William Langhorne, governor of Madras. Langhorne lived at the home until 1715 when he passed away at age 85. However, according to many, his ghost still wanders the old pile, turning doorknobs of all things.

However, Langhorne isn't the only ghost in residence at Charlton House. An unnamed servant girl in Jacobean dress has been spotted on occasion carrying a dead baby in her arms.

During World War I, the home was used as a hospital. However, the staff refrained from using the most haunted room in the house until it became absolutely necessary.

During WWII, the house was damaged by bombs. During reconstruction, workers found the mummified remains of a small child walled up in one of the home's many chimneys.

These days, the manor is a municipal building for the Greenwich Borough Council and houses the local library.

Visitors and employees alike have continued to confirm the home's haunted reputation. The third floor is a particular hotspot, especially in those areas known as The Grand Salon and the Long Gallery; the latter has been the locus for sightings of phantom rabbits, as the gallery once housed a hutch of these creatures.

Added to the list of storied specters is that of an Indian man thought to have been a civil servant who has a fondness for pinching women on the rear.

The Society for Psychical Research (SPR), The Association for the Scientific Study of Anomalous Phenomena (ASSAP), and The Ghost Club have all witnessed strange, unexplained phenomena at Charlton House. However, the most intriguing events likely transpired during an investigation in late 1995.

BBC assistant producer Amir Jamal was taping a paranormal program with ASSAP's Les Herbert and Maurice Grosse of the SPR. The men were keeping vigil in the Long Gallery when shortly after 11 pm Grosse heard a police siren suddenly erupt from outside. Immediately following this was the sound of a loud explosion that seemed to emanate from within the gallery.

The men jumped up and turned on the lights. There, in the center of the room, was a blue and white teacup, broken into 7 pieces and laid out in a circle.

There seemed no apparent indication as to where the teacup had come from since, after being question, the staff revealed that the cups used on the premises were all plain white.

Grosse attempted to recreate the event but couldn't satisfactorily explain how a cup could have fallen from anywhere, hit the floor, and arranged its pieces in a circular fashion.

Whereas the BBC audio is reported as having picked up the sound of the explosion, it is unclear as to whether any of this was caught on video. Audio experts who analyzed the recording confirm the sound is consistent with a loud explosion and not that of a tea cup shattering.
The consensus became that, although unexplained, the event was not hoaxed.

Proponents of paranormal phenomena saw this as a clear example of an apport, or an object or being that suddenly manifests from...wherever. Apports are often associated with mediumistic talents. The antithesis of these are asports, or objects that suddenly vanish.

On July 30, 1999, the Ghost Club heard a similar explosion, which seemed to move a test object of theirs 10 feet into the air.