Have you seen any of the buzz and hype around the supposedly haunted film "Return to Babylon"?

The film, which stars Jennifer Tilly, María Conchita Alonso, Ione Skye, Debi Mazar, Laura Harring, and Tippi Hedren, is an homage to the silent film era and is directed by Alex Monty Canawati. According to some, the 19 rolls of 16mm film the auteur used to shoot his work were found on a sidewalk along Hollywood Boulevard.

Canawati claims that during reviews of the dailies (all the film shot from various angles on any given day) that the actors' faces appeared to be 'morphing' into various, biblical countenances, as is explained in the video above.

However, when he points out that Maria Conchita Alonso seems to transfigure momentarily into a biblical figure, one almost has to laugh out loud. What Canawati sees as the sudden emergence of a bearded countenance is quite clearly the actor's hair swinging in front of her face as she rushes down the steps.

There are other peculiar shots, but one has to wonder if these aren't artifacts created from using found-on-the-side-of-the-road 16mm film in vintage cameras and then scanning those into a computer for editing purposes. Or they could be hoaxes. No one has examined the original negatives as far as I can tell, so we can't verify that these faces are there on the film and weren't just rendered in the computer during the post-production process. Even if these unusual visages are on the film, who is to say that these 16mm rolls aren't an interpositive film created from a manipulated master being copied to additional 16mm film. 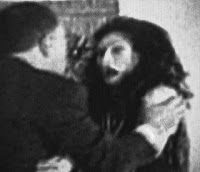 Canawati performs his own biblical transfiguration when he climbs upon an old rugged cross to play the part of a martyr who has been harassed and damaged by daring to make these claims. This whole scenario smacks of publicity stunt, a way to drum up excitement for a film that isn't making a return investment. A story that becomes even more suspicious with the allegations that Canawati has battled drug addiction along the way.

If it is a last-ditch effort to generate buzz, it seems to be working. According to the many bulletin boards and comments I've been reading, there is a sizable group anxious to see this film--if for no other reason than these mysterious morphing mugs.