Sinister Story of the Cecil Hotel 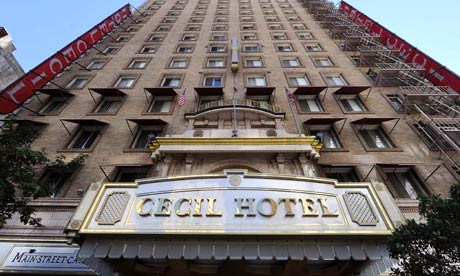 While many hotels, especially those that have stood for any length of time, have stories--even dark ones--Los Angeles' Cecil Hotel has some of that city's darkest.

Built in 1927 as the ideal lodging for weary businessmen, the Cecil had become little more than a flop house by the 1950s.

Over its many decades, its halls have been darkened by the likes of serial killers Richard Ramirez and Jack Unterweger. It's also one of the last places anyone had seen Elizabeth "Black Dahlia" Short alive.

The hotel has seen plenty of suicides, which might include Elisa Lam, a 21-year-old Canadian woman who was discovered in one of the water tanks on the roof. Lam was last seen on surveillance video acting peculiarly as she stepped in and out of an elevator (almost as if she were hiding), pressed all of its control buttons, and seemed to speak to an invisible presence. It is said she suffered from bipolar disorder.