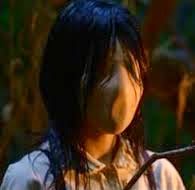 Japanese folklore is filled with tales of the Mujina, a faceless spirit. The chilling accounts of those who claim to have met a Mujina read like urban legend, and go back a long way. In 1904, Lafcadio Hearn wrote one of the earliest accounts for Western readers in his book Kwaidan (Weird Tales).

In this volume, he tells the story of a Tokyo man who was following a road up a hill when he encountered a weeping woman along the wayside. Stopping to see if she needed aid, the man was frightened to discover that she had no face. In fear, he raced further up the road until he saw the dim glow of a lantern in the distance. He saw that it was a food vendor known as a soba. Grateful to find another living soul, the man explained his experience to the vendor, but he stopped short of explaining her face exactly. He was still too frightened to recall the experience. The soba man, moving from the shadows into the glow of the lantern, asked if perhaps she looked like this. To the traveler's horror the soba man, too, had no face. Suddenly the lantern was extinguished and the man was alone in the night with the faceless Mujina.

Japanese immigrants to Hawaii likely brought the legend with them, which might explain a rash of sightings in 1959.

In Honolulu, at the Waialae Drive-In, a girl encountered a faceless entity in the restroom, an event so traumatizing that she reportedly had been hospitalized. Another version said that the girl spotted a faceless woman with no legs in the mirror as she freshened her makeup. When she spun around, there was nothing there. The woman screamed and passed out.

Other reports have surfaced at weddings, shopping malls, and colleges across Hawaii in the intervening years.

Very interesting creature. I may have to do some research and type up an entry for my own blog on her!

What is more scarier, faceless or head less?

I'm going with faceless. It drives the creep factor deeper into the 'Uncanny Valley'. It's that just off enough to be revolting aspect.