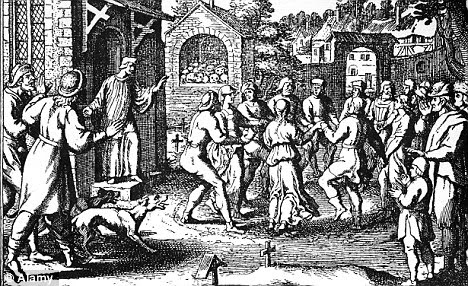 In the summer of 1518, the town of Strasbourg in France was literally dancing in the streets--and no one could explain why.

It seemed a strange sort of plague had taken hold of the city, beginning with Frau Troffea. Within a week more than 30 townsfolk were dancing in the streets. Within a month, that number swelled to 400.

These men and women were dancing night and day to the point of exhaustion. Some began suffering heart attacks and strokes.

Medical men were called in and came up with a sound solution: build them a stage and strike up the band!

Explanations range from spiritual ecstasy or the much-abused "mass hysteria" to an outbreak of ergot poisoning, the latter being a type of mold that affects grains and, if ingested, can cause hallucinations and seizures.

Eventually, those dancers that survived slowly began to leave the perplexing promenade and life returned to normal, leaving us scratching our heads the weird little dancing plague of Strasbourg, France.