Bring Back The Holiday Spirits 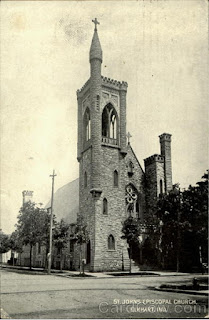 There has long been a tradition of telling ghost stories at Christmas. In the US, this tradition has largely fallen by the wayside. I think it is high time we resurrect this practice. In the "spirit" of Christmas, I'll recount the following:

In the Summer of 1916, The Washington Post recorded a story out of Elkhart, Indiana. Apparently a well-known haunted rectory was slated to be razed due to the fact that no one would live in the structure.

The rectory, property of St. John's Episcopal Church, was by all accounts in good repair but had sat unused for a number of years because none would stay even a single night.

The final occupants were Reverend W. W. Daup and his wife, the latter of whom was driven to nervous exhaustion, thus cementing the rectory's reputation.

A medium was brought in at one point. Through her investigation, she learned the spirit was that of a former rector's daughter who killed herself in the home.
﻿