The Truth Behind A High-Flying Fake 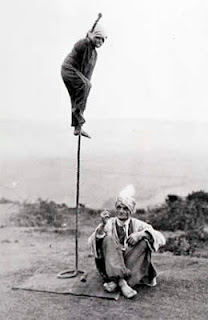 Caught a bit of a documentary about the science behind supernatural phenomena. The program I caught, which aired on Chiller, dealt with purported events of levitation, focusing much on ancient Indian mystics and their practices. One in particular caught my eye because of its romantic, colonial connotations: the Indian rope trick.

The famous rope trick, in short, involves a rope that at the command of a mystic rises mysteriously into the air with enough rigidity to allow a boy to climb it--and sometimes disappear. The entire illusion is fraught with controversy, from how it is achieved to even how and where it began. Some claim it began no later than the 1890s with a hoaxed newspaper article. Still others claim it dates back much further in India with references to tricks of climbing unsupported ropes showing up in the 1700s and perhaps even earlier.

As to how the trick was performed, explanations range from mass hypnosis (brought about by burning hallucinogenic substances) to performing the trick at night between two trees where a wire could easily hide against the dark sky. However, mostly it seems that the whole invention didn't exist prior to an 1890 article that appeared in the Chicago Tribune. Most reports of having seen the trick performed earlier in the 19th century (often by former British soldiers) are either misremembered events or some type of tacit collusion with the hoax.