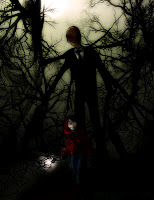 With recent interest being shown by the likes of SyFy's Paranormal Witness, we're hearing more these days about the Internet-born meme known as Slenderman. Despite a well-known origin, many still firmly believe in the reality of Slender Man--or, at least, something like him.

The phenomenon began within the murky depths of a "paranormal pictures" photoshop contest hosted on Something Awful Forums back in the summer of 2009. This contest asked participants to manipulate previously-established images into something creepier. One user, Victor Surge, presented two black and white photos of children with a mysterious, extremely tall being dubbed "Slender Man". Pseudo-journalistic text accompanied the images, adding a further layer of verisimilitude.

“We didn’t want to go, we didn’t want to kill them, but its persistent silence and outstretched arms horrified and comforted us at the same time…” – 1983, photographer unknown, presumed dead.

One of two recovered photographs from the Stirling City Library blaze. Notable for being taken the day which fourteen children vanished and for what is referred to as “The Slender Man”. Deformities cited as film defects by officials. Fire at library occurred one week later. Actual photograph confiscated as evidence. – 1986, photographer: Mary Thomas, missing since June 13th, 1986.

From this inauspicious beginning, the legend took hold and spread like some dark plague of paranoia throughout the world. In time, "he's real" type stories began cropping up from various online posters who swear they've had real-life encounters with such a being. Even if the actual "Slender Man" had been made up, they say, he was based on a very real entity the creator likely saw.

Slender Man doesn't really seem to do anything to terrorize; it seems sufficient that he simply is terrifying. In this way, he reflects the changing culture we live in, one that moves too quickly to do more than recount legends and myths in shorthand. We have within most of us a wealth of readymade motifs, archetypes, and tropes fueled by countless pop-culture references, horror films, novels, and the like to fill in the gaps any tweeted legend might offer. Another example of this would be the Black Eyed Kids meme, which I have discussed before HERE.

Slender Man is not the first zeitgeist to slip into that gray realm of I-swear-it's-really-real. In 1970, English journalist Frank Smyth wrote an article for Man, Myth and Magic, wherein he manufactured the ghost of a mad vicar who, in life, robbed and killed boarders to his rooming house. In the years since that article, at least eight books have recounted the tale of the vicious vicar, citing it as "true". Even after the author appeared on television to explain the hoax, many "witnesses" adamantly claimed they had see the clergyman. All of this being, of course, quite reminiscent of works such as Arthur Machen's The Bowmen.

We can easily play around with what-if scenarios, such as: What if WE created these manifestations by focusing on them? I think of the SORRAT (Society for Research on Rapport and Telekinesis) experiment wherein a group focused on creating a ghost named "Philip" with only their minds, manifesting him from sheer thought. This is like the Tibetan concept of a Tulpa, a thoughtform that manifests from the mind of an adept. If the Tulpa is strong enough, it can, in turn, manifest its own thoughtforms.

But these are actually all very facile explanations that do little more than comfort and coddle the minds of those who (for whatever reason) WANT to believe. The truth, it seems, is much harder to grasp. Although, if anyone, I suspect Slender Man could give it a try.

'Supernatural' did a Tulpa episode about an entity brought into being by a town's belief in a haunted house legend. It was an interesting concept to mull over.

I should inform you that , while , the stories may have some instances remenicent of a tulpa , there are some instances that are more bisare of themselves , many people have claimed , and I , sometimes have witnessed , bissare links hat occasionaly pop up through these stories that are , a bit stranger , for instance , the weakness to red hot iron , similer to a reverse fairy , never disproven , but , somehow , right after its use , the blog seems to slow down , or stop , second , is the water , though , its appeared in some of the more populer slender blogs , so , I'll give you that , but , most strange , is the recent links to other mythologies , like the watchers , I was informed of this link by an aquaintence , who I hope to talk to again , who never mentioned it publicly , then , I find out , some other slenderblogs have started useing , the information , with no previous explenation , I find that odd , but , even stranger are the coincidences , I knowticed , in some of the smaller , less populer slenderblogs , they all follow some common pattern , they dont doubt the hot metal , specificly iron rule , and , it doesnt fail when they try it , it , always starts with dreams , and , if they beat the dreams , the thing doesnt appear , and , in the smaller ones , there's always , to an extent , someoe going inain , this is almost never explored in the more populer slenderblogs , and , most often , the more populer ones , can seem to be proven false , but these , they dont seem to be proven false , when they end , they just dissapear , and , they never seem to have secondairy e-mails , or any other secondairy sorces , so , they often arnt proven false , dont you find that a bit odd?