Sweet Dreams Are Made Of These.... 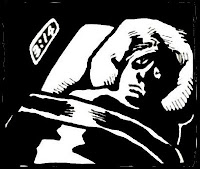 The masterful pumpkinrot.com website is the bastion of superior Halloween decor. But the blog also contains some interesting and insightful recollections from childhood. In perusing these, I find this post and attendant comments to be quite spine-tingling. Do you have similar memories?

"Growing up in my parents' house, my brother and I shared a room. We had an old wooden cross on the bedroom wall. It looked more like something that Peter Vincent would have in his home, and I'm pretty sure that's the look we were going for back in those days, since we also had skulls and devil masks, and weird lamps in there as well.

One night, late, I was trying to fall asleep and noticed my brother was stirring. He sat up and looked like he was still sleeping. He turned to the wall and looked up at the cross. Then he reached up and removed it, and then reached down and sat it on the floor and went back to sleep.
I should have yelled "DUUUUDE!?!?!?!!?" but I was kinda frozen with fear. And probably remained that way until the sun came up."

And from this post's comments section:

crudedoodle.com said "I remember once, waking up to my brother talking to me in his sleep. He pointed to the window and said something along the lines of, "there are men outside the window." We were on the second floor so, naturally, I took it as evidence of an alien visitation and remained spooked for the night."

Marrow added "My cousin was having a sleepover with her friend once, and in the middle of the night she woke up. Then her friend suddenly sat up, got to her feet and stood straight up on the bed for a few seconds. Then she got down on her hands and knees and crawled around on top of the bed, still half asleep, but looking scary as hell. When she saw my cousin, she stared at her strait in the eyes and didn't move. When my cousin asked what she was doing, she replied "YOU TOLD ME TO DO THIS" and insisted that she forced her into it, then finally went back to bed."

Oh man! Yeah! I used to walk in my sleep and freak everyone out. One time, I picked up a fencing sword and parried with an invisible specter. My mother said it was enchanting. Then, I just set it down on the coat rack where it was supposed to go and turned and walked into the music room and promptly fell asleep on the sofa.

Creepy! I, too, was a somnambulist when I was small. My mother tucks me in my bed but they would at times find me in the living room.

Eerie! I, too, used to be a somnambulist. My mother would tuck me in my bed but hey would at times find me in the living room and I couldn't remember walking.