Orange County, CA residents spotted a mysterious light last night that appeared to change colors and shift about the sky. If one witness is to be believed similar lights have been spotted elsewhere in the country recently.No explanation has yet been presented as to what may hve caused the unexplained sight. You can watch a local news report here. 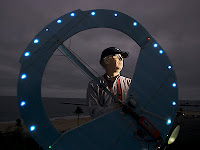 Could this, though, be the work of infamous hoaxer Linn Murphy who has long played the UFO prank on hapless OCers? In the middle of the last decade, Murphy flew an RC disc outfitted with colored lights, pausing football games and generating traffic problems. Considered a nuissance by some and a rebel by others, Murphy's pranks. In reality, he mightn't be either.
Read more about this curious fellow here.

Yikes. Sometimes, I appreciate hoaxers like crop circle makers, and other times they just muddy the waters even more. We can never get good evidence so long as any of it can be hoaxed.