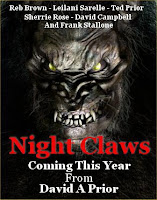 David Prior, a 54 year-old Mobile man, is the mastermind behind nearly 20 low-budget films since the late 1980s. His latest effort sees Bigfoot stalking the piney woods of Mobile Co., AL in search of hotties to ravage and baddies to savage.

Night Claws is your classic fish out of water story. In this case, the fish are "east coast" types who find themselves at the mercy of the legendary beast who is, in turn, hunted by a local ruffian (David Campbell) and his two lackeys.

Frank Stallone (yes, THE Frank Stallone) brushes past the lens a couple of times to lend what could only be considered "gravitas" to a film otherwise destined for the 2 for $5 bin.

Principle shooting concludes April 9. Can't wait to see what magic happens in post production (likely there won't be any CGI).

No word as yet on when the film will be released, but they do have a presence on Facebook, so check that if your hearts aflutter for a new D-grade biggy offering.

Ew. I dare real moviemakers to attempt to handle the BF subject matter. I wish someone could do it right. I don't want a cannibal BF, a family buddy BF or a sex crazed BF (yes, there are some of those flicks out there). I want a BF that does what BF does--shows up, scares people and stays in hiding. Something like Legend of Boggy Creek except not anywhere as cheesy.

I agree. No one has ever done BF in a respectful manner; it's always schlock horror. I would like to see something more nature-driven, treating the creature as an animal in the environment. Think more along the lines of Gorillas in the Mist or The Edge. The animals aren't characters per se, but rather the backdrop upon which human drama unfolds.