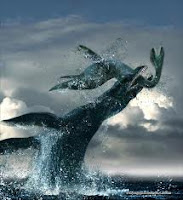 Two Barbados fishermen recently described an encounter with a sea "monster" 3.5 miles off Shower Bank, near Hilton Barbados.
Joel Brooker and his fishing buddy, Wendel Bryan, spotted the beast that Brooker described as 40 feet long with a flat head, two eyes, and a mouth that remained open throughout the entire event. At first Brooker thought it was a sunfish, but then thought it was a submarine. It wasn't until he saw small symbiotic fish attached to it that he realized this was a living creature.
Brooker discounts that it was any species of shark. In fact, he felt it didn't look like anything he had ever seen in the sea.
Read more at the Daily Nation
Two years ago, I was in Barbados peeking in at the mysteries surrounding the famed Chase Vault, which you can read about here.  And having lived in the Caribbean for several years, it's easy for me to imagine the setting for this fantastic tale of surfacing sea monsters. Perhaps more sightings are to come.

fantastic eyewitness accounts. I only wish they brought in a real sketch artist. I always cringe and laugh when i see someone trying to draw it up themselves. It just makes it seem more unbelievable.