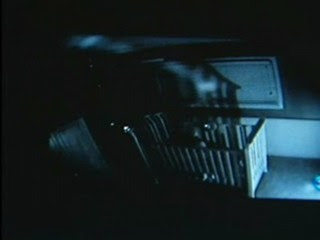 Dallas dad, Steven Divine, and his wife have discovered startling images on the 'nanny cam' that watches over their young child.

In something seemingly straight out of The Sixth Sense, the Divine's have recorded several noctilucent anomalies on the night vision camera that watches over their two-year-old son. In one video, a light manifests near the crib, floats toward the opposite end of the room and vanishes. Then, only seconds later, a series of glowing orbs, strung like pearls on a streak of light, moves across the upper portion of the camera's field of view.

The lights would vanish if ever someone entered the room while they were occurring, implying something of an awareness of the part of these streaks and orbs.

In time, the phenomenon has quieted down some and seems only to flare when strangers are in the home. Divine believes that whatever has slowly become acclimated to the family, and that it may be watching over their son.

According to the Divine's, more than two dozen people have witnessed the strange events and can attest to the veracity of these claims.