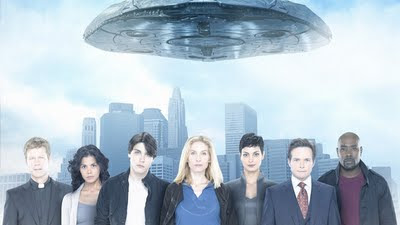 Much like the disaffected Visitors themselves, the whole of last night's debut of "V" lacked the gravitas of the original. The revelation of giant motherships hovering ominous and silent over the world's largest cities seemed anticlimactic, lacking that quinessential what the hell is that? moment. Throughout the one-hour episode, key elements were continually flung at viewers faster than could be properly appreciated. There was no time for the citizens of earth to sit, cowering fearfully in the shadow of those great ships looming high overhead, wondering who or what was inside and if they were dangerous. Scant moments after arriving, the underbellies of these ships turn into giant jumbo-trons whereupon the ethnically ambiguous leader of the aliens appears like the new face of Cover Girl.

This new incarnation of the famed mid-1980's miniseries/series didn't take the time to truly craft characters and their backstories so that we may care about them going forward. No, instead we see our would-be resistance fighters brandishing the emotional range of sedated mental patients. Even when panicked mother/FBI agent frantically searches for her child during the initial chaos, you sense she easily could have been looking for a set of keys she dropped. And each other main character is set up in this same lackluster fashion, almost as if the writers/director are banking on that big V (which looks more like a gorey smear than a spray-painted emblem) to sell this show. Well, let me tell you: a large portion of that 18 to 35 demographic were yet even a gleam in their parents eyes when the first "V" aired.

Even though I was around 10 when the miniseries first debuted, I still picked up (being the special child I was) on the more important elements at work behind the cool sci-fi action. There was a powerful allusion at work that resonated with emotional experience. While such close comparisons as the Visitor arrival to Nazi occupation might, on the surface, seem dated, they are in many ways more relevant than ever. Our current socio-political landscape is, too, ripe with issues to address and allegories to craft, but instead we are served simply another sci-fi show with aspirations of dramatic grandeur, a la "Battlestar Galactica". And much like BG, this new offering ends up being pretty people with guns.

While I'm the first to admit that the ultimate big-haired, Dynasty-in-space mess that became the original "V: The Series" was a pit of bad writing, over-acting, and poor production values, you could at least blank all that out and remember the really great miniseries that started it all. It was a show that made you care about the disparate characters who banded together: a young, idealistic doctor who reluctantly comes to lead a rag-tag group of freedom fighters comprised of scientists, blue-collar workers, and even criminals - and an old woman. In that confluence of tension, a great story of survival against all odds was crafted.

Now, flash-forward to 2009: a laconic FBI agent is shaping up to lead former terrorists against the encroaching reptilian invasion. Oh, sure, there's a priest thrown in the mix - probably to muddle the morality from time to time - but, in all, you've got a pretty good group to lead the resistance movement. Ideal, almost. As trained militants, they won't be burdened with questions of "can I do this" or "I'm no leader, I'm just a doctor". All that pesky nonsense has just been pushed aside, quite cooly I might add.

And, ultimately, that's my biggest beef. V-09 is sci-fi on Zoloft. "They're lizards here to harvest us for food? Meh."

I agree with much of what the reviewer states and noted also that commentor #2 (Lindsay) makes my point succinctly; they tried to do too much right off the bat.