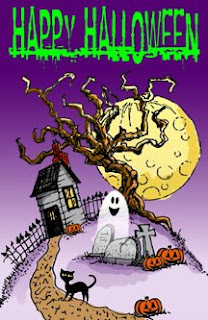 While no quantitative analysis may yet have been done to establish October's ranking among the high months for high-strangeness, I'm certain we can all rest assured it's up there. The following Oklahoma accounts reflect the mystery and magic inherent to the Hallowe'en season. You can read more about them in the non-fiction work, Strange State: Mysteries and Legends of Oklahoma, of which we've a few more copies. So, if you're interested, e-mail me at strangestateok @ yahoo.com.

A canyon near the old Fort Arbuckle at Davis was the site of a battle fought between the Army and tribe from the region. It said that the battle took place on October 31st. Legend claims their ghostly wailings can be heard still today at the canyon's "moaning cave".

One of the best times to catch a glimpse of the forces that haunt Fort Washita is the last night of October, according to locals.

In October 1971, three young men took up occupancy of the old, abandoned Alva General Hospital in their new jobs as security guards. They weren't prepared for the ghostly shennanigans that ensued as electronic problems, showers that turned on themselves, and mysterious reappearing blood stains.

A mysterious oval-shaped object was witnessed in the sky over Oklahoma City on the evening of October 28, 1957 by Mr. and Mrs. Robert A. McCulloh and their neighbors.

Late October saw a rash of UFO sightings across Oklahoma in 1973. Newspaper editor, David DeLand, recounted his own experience in the Muskogee Daily Phoenix.

The illustration accompanying this post is my own handiwork. If you're in need of such services, please feel free to drop me a line. You can check out more examples of my work at the Fresh Eire Design blog (link listed).

I can attest to the quality of Cullan's work - he has done work for us and we highly recommend him!

I'm thinking we may have to give you something to do that will enhance our blogs and web-sites.